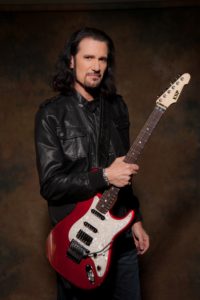 Bruce Kulick became a guitar hero when he was asked to join KISS in 1984. As their lead guitarist, Kulick was featured in the band from ’84 until ’96, performing around the world in addition to his recordings and videos with the iconic band. During those years, he earned multiple Platinum and Gold records and video awards. In addition to his years in KISS, he toured or recorded with Meat Loaf, Billy Squier, Michael Bolton, Avantasia, Lordi, Union, and many others. Since 2000, Kulick has been the lead guitarist for Grand Funk Railroad, “The American Band”. In addition to his appearances at guitar shows, clinics, and fan autograph events, Bruce has been a featured performer on the sold-out KISS Kruise since 2017.